On 27 October 2021, J.CLAIR Singapore, in collaboration with the National Institute of Public Administration (NIPA) in Indonesia , as well as the Ministry of Internal Affairs and Communications (MIC) in Japan, jointly organised the ‘Indonesia-Japan Knowledge Exchange Seminar 2021’ for local government officials in Indonesia. Due to the travel restrictions imposed as a result of the COVID-19 pandemic, the seminar was conducted virtually this year to facilitate easier participation as well as to ensure a wider reach.

It is an undeniable fact that the COVID-19 pandemic has brought enormous negative impacts to many countries around the world, including Indonesia and Japan. In the context of Indonesia, the COVID-19 pandemic that started in early 2020 has deeply affected the local economies, and the local governments are making their best efforts on the path to recovery. Both NIPA and J.CLAIR Singapore deliberated on the theme of the seminar, and decided that ‘local economic revitalization efforts in the COVID-19 pandemic era’ would be most relevant to the local governments in both countries and would be able to initiate exchange of best practices between Japan and Indonesia.

J.CLAIR Singapore has coordinated with MIC in selecting the speakers from Japan, and as a result two local government officials from Nishi-Izu Town, Shizuoka Prefecture as well as Shimane Prefecture were invited to deliver lectures  at the seminar. The speaker from Nishi-Izu Town delivered a lecture entitled ‘Promoting economic revitalization through local digital currency: A case study of sunset coin in Nishi-Izu Town’. On the other hand, the speaker from Shimane Prefecture’s lecture topic was ‘ Enhancing human connection: A look at the multi-faceted efforts of online tours’. Both lectures featured case studies of economic revitalization implemented by Japanese local governments, whereby both speakers lectured the role of local governments and their cooperation with the related organizations.

Concurrently, two speakers from Indonesia who represented the Coordinating Ministry for Economic Affairs, as well as the Provincial Government of West Java have also delivered lectures during the seminar. Both speakers first examined the current situation of the COVID-19 pandemic in Indonesia based on the latest statistics, and then explored the strategies for local economic revitalization from the perspectives of the central and local government. Both speakers from Indonesia have emphasised on the importance of implementing control measures for preventing further outbreaks while at the same time ensuring a rebound of the local industries. 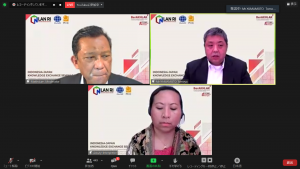 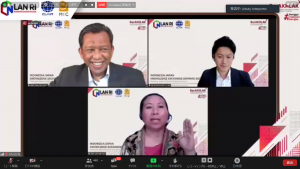 On the day of the seminar, about 450 participants who were mainly local government officials from Indonesia, participated in the lectures with great enthusiasm. During the 15-minute question-and-answer session that followed each lecturer’s presentation, the local participants proactively asked questions to the lecturers, indicating the urgent need for local governments in Indonesia to address economic revitalization in the post-COVID era.

During the question and answer session, some local participants asked the Japanese lecturers on whether fines or incentives were used to implement new initiatives such as the electronic local currency or online tours. Both lecturers answered that Japanese local governments worked with cities and towns in the prefecture to educate them about the new systems, whereby they went door to door to persuade local small businesses and did not provide incentives. The moderator, panelists and many other participants were impressed by the success of this Japanese approach. Due to the differences in culture and customs, the roles required of local governments in the two countries may differ in some respects, but the seminar participants were agreeable on the view that local residents are the drivers of the local economy in both countries.

This seminar provided a constructive platform for participants to share their ideas and opinions on issues of common interests as well as solutions to those issues. It is hoped that this seminar has contributed to strengthen the cooperative ties between local governments in Japan and Indonesia, and at the same time laid a strong foundation for the continuous exchange of information and opinions between both countries in the future.