【Fukuoka City】 The World Swimming Championships will be coming to Fukuoka City in May 2022 for the second time in 21 years!

【Fukuoka City】 The World Swimming Championships will be coming to Fukuoka City in May 2022 for the second time in 21 years!

【Fukuoka City】 This is an announcement from the Organizing Committee of the 19th FINA World Aquatics Championships 2022 in Fukuoka.

The World Swimming Championships will be held in Fukuoka City for 17 days from 13 May (Fri) to 29 May (Sun) 2022, for the second time in 21 years since it was first held in Asia in 2001.  In addition, the World Masters Swimming Championships will also be held in Fukuoka City, Kumamoto City and Kagoshima City for 10 days from 31 May (Tue) to 9 June (Thu) 2022.

The 19th International Swimming Federation (FINA) World Aquatics Championships 2022 in Fukuoka will take advantage of the compact urban structure that is one of the characteristics of Fukuoka City. In order to reduce the travel burden on swimmers, and at the same time increase the excitement of the entire event as well as efficiently manage the event, the organizers will utilize special pools and consolidate the competition venues, other entertainment and recreational areas in a compact area so as to maximize the value of the event while maintaining a compact environment.

In addition, by collaborating with local companies and utilizing cutting-edge technology, the organizers aim to create an innovative event that makes the competition easier to understand and more enjoyable.

This event will be held in three cities: Fukuoka, Kumamoto and Kagoshima.

By holding the event in three cities, the organizers hope to spread the impact and legacy of the event widely, such as ‘promoting swimming to all generations’, ‘promoting interaction between participants and citizens’, ‘enhancing the power of the cities’, and ‘create economic ripple effects’

The organizers’ goal is to create an event where people can enjoy not only the competition but also spend quality time exploring other rich offerings of the cities. 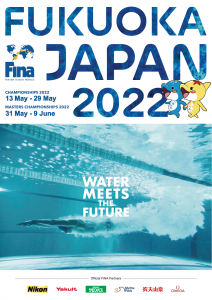 For the latest information, please visit the Games’ website (https://www.fina-fukuoka2022.org/en).